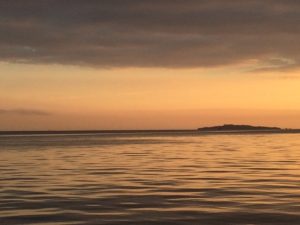 ecretary’s Report and Report on Planning Matters for Jan 2017

The River Almond Fisheries Trust have applied for permission to repair Fair-a-Far Mill and replace the existing fish pass with a more effective fish pass structure.  The Community Council and Friends of the River Almond Walkway have been consulted on the proposals and influenced the design of the fish pass, resulting in the use of natural sandstone facing, rather than concrete.

Current enquiries to the planning authority, to assist the CC’s submission, have:

Proposals for Dowies Mill Weir will be the subject of a later planning application.

5 Essex Road is a large property with rear garden facing on to Ewerland road.  It is proposed to subdivide the garden and build two houses in the southern half of the garden area.  Along with parking space, etc., these houses would take up the majority of the subdivided garden space.

The Community Council have consulted neighbours and received negative responses to the proposals.  Following appraisal of the site, it is proposed that CBCC opposes the development on the following grounds

It is suggested that the Community Council’s submission on the development of this site, which comprises agricultural land to the north of Craigs Road and west of Maybury Road

Reasons for opposing development include

Notification has been received from the CEC of its intention to promote a traffic restriction order covering the planned entrance to and egress from the Care Concern Care Home behind Cramond Glebe Road. This is designed to facilitate the access of construction vehicles on to the site.   The formal opportunity to object will come at the next stage in the process but the CC will nonetheless offer preliminary comments on the traffic congestion concerns which will arise.

We are awaiting a date from Peter Keggie one of the senior roads engineer at the CEC Drum Brae Hub for a meeting to discuss various roads within the CC area where there is a need for tros to mitigate the effect of indiscriminate parking.

Wall In Front of the Maltings

A NEPS Project which was approved last year has now materialised with work progressing to repair the wall in front of the Maltings, some fresh planting etc.  And officials met with us on Tuesday 17 January where we discussed some small adjustments to what was proposed to future-proof the work to better meet the Visions plans for this area. The officials were happy to work with us to accommodate the proposed changes.

Your attention is drawn to this project which is being run by Changeworks and the University of Edinburgh.  Residents may apply to participate subject to certain criteria in support of the project and in return receive expert advice which may save money on gas and electric bills.  Copies of the notices with further information have been posted on the notice boards and are being sent out to all on our global list.

Residents living in the CC area should be aware of the fact that some 92% of residential properties in the locality fall in the higher rates bands for which the Scottish Government has sanctioned a 3% increase.  However, the City of Edinburgh Council is one of several which has also taken up the lifting of the centrally-imposed freeze to impose further increases on top.  These are substantial in particular for houses falling into bands G or H.

We have received confirmation that David White the Locality Manager for North West Edinburgh will come to our April meeting to speak to us about what integrated health and social care will mean for us and how we may expect to influence their plans.  David is expected to be accompanied by a clinical lead.

After a question to the Culture and Sport Committee by Councillor Lyndsay Paterson in October and a subsequent meeting with Frank Little the Castle and Museums Manager, the following message to the committee was agreed:

‘The Forget me not Trust has been established and is working in Partnership with the City of Edinburgh Council to create a Community Sensory Garden and ‘drop in centre’ at the Lauriston Castle Gate House for people with dementia and their carers.  To enable the Trust to apply to major funders, such as the Heritage Lottery Fund, the Gate House needs to be secured by the Trust.  A 25-year lease option is being explored.  Legal advice is currently being sought on the conditions of the Lauriston Castle Trust as to whether there are any legal impediments to leasing the property.  A report on the outcome of this work will be brought to the next Culture and Sport Committee in March 2017.’

Frank Little apologised for the delay in taking this project forward even though it is considered a major project for the City.   He is hoping before March that an agreement can be made for the Trust to start working again on the garden itself, even on a month by month licence until all the legal issues have been completed.

At last, it looks as though progress can be made.

The Dementia and Carers Lunch Club.

We certainly finished off the year on a high note, with our Halloween party in November.  Heather (one of our team) had us ‘dooking for apples’, ‘eating doughnuts from a string’ and many other games.  Heather also decorated the Millennium Room with black and orange crepe papers with hanging spiders and skeletons on the walls.

Heather even borrowed a full-size skeleton from a local hairdresser. Lunch included party food and a specially ordered Halloween cake.  A good time was had by all and the attendance was up over 30 persons (sufferers and carers).

December was slightly more sedate with Alan Midwinter, leader of the ‘Forget-me-notes (a dementia choir), leading us in carol singing.  Again, the numbers were up over 30 and lunch this time included Christmas cake and mince pies.

January will be even more sedate with sitting exercises and singing by ‘Aging Well’ from Edinburgh Leisure.

Other opportunities have been available for the group seeing the full version of Chitty Chitty Bang Bang, a shortened version of the Mikado, The Marriage of Figaro and just recently, Hansel and Gretel, all thanks to the Festival Theatre.  All these productions are adjusted to suit dementia sufferers e.g. no strobe lighting, a raconteur outlining the next part and sometimes tea and scones after with the cast joining us.

We also had a trip down the Canal at Ratho, fortunately, we had a good day and could sit outside on the boat.

Our most recent trip out thanks to the Pilton Equalities Group, who provided transport, was to see an amateur version of Aladdin with ice cream in the interval and supper afterwards.

We are a very happy bunch.

One of our team won one of the raffles, boxes of groceries provided by Morrison’s.

Unfortunately, due to the timing, we were unable to find an organisation in a position to auction the box of groceries for us.  We, however, will be able to use the biscuits etc. from the box.

Daphne one of our regulars is still knitting ‘fish and chip’ jumpers and hats for babies and is in need of brightly coloured double knitting wool.  Equally, we are always happy to hear of groups who will take these outfits to Africa or too many of the refugee camps throughout the world.

If you can help with ways of fundraising, ideas for entertainment and/or even join us on the First Monday of the month, you are most welcome.

There is an increased number of people in the area suffering from Macular Degeneration. The ‘Care in the Community’ team have been discussing with the Macular Degeneration Society the formation of a bridge club run by the Edinburgh branch of the Scottish Bridge Society, for people with eyesight impairment. To date, we have not been able to progress this partially due to lack of funding for transport to a proposed club. Efforts continue to make this project possible.