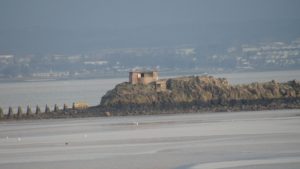 This proposed nursing home development will be considered by the Development Committee on Wednesday 22 June. The officials report published on the Council’s website on Wednesday 15 June recommends approval of the application rejecting the 475 objections raised; no material considerations; no negative impact on the Cramond Conservation Area nor on the amenity of neighbours; no concern about any additional traffic impact. The list of disregards is endless. 2 good bus services accessible on Whitehouse Road will support a transport plan for 90 new staff bringing the prospect of local jobs to the community. They can’t even keep up to date with the fact that another Committee of the Council having withdrawn the subsidy for the Horsburgh 64 service have left the community with 1 service. But wait if these are local jobs then the bus services will not be required. You can’t make it up – but unfortunately our planning officials have. One quote from the submission which sums up the whole tenor of the official’s analysis. This is effectively the response to the risk that the proposals should not harm the character or appearance of the conservation area. If this were to be the case, then there should be a strong presumption against granting planning permission. The officials’ response on this is as follows:

Our Councillors have called for a hearing but, thus far, and like us have not had the courtesy of a response.

The Reporter has advised planning officials at the City of Edinburgh that he expects to sign off LDP 2 by the end of June. City officials will then consider the document and make recommendations to the Full Council on 3 September 2016

There is a public consultation until end of June on proposals by the City Council, with the support of Friends of Cammo and the Cammo Estate Advisory Committee of which the Community Council is a member, to designate Cammo Estate as a Local Nature Reserve (LNR) under the provisions of the National Parks & Access to the Countryside Act 1949 (see https://consultationhub.edinburgh.gov.uk/sfc/cammo-estate-lnr).

Amongst the objectives of LNRs are the protection, management and improvement of the natural heritage, with nature conservation as the priority. Community involvement, education and informal recreation are also desirable management objectives. Friends of Cammo also see such designation as means of strengthening protection of the Estate against future development.

The Estate meets many of the criteria for designation, including current management measures, natural heritage values and opportunities for research and study of the natural heritage. Scottish Natural Heritage recommends also that LNRs should provide accessible and positive opportunities for raising awareness, understanding and enjoyment of the natural heritage and should be well managed and safeguarded. LNR status would complement the Estate’s other designations, including Greenbelt, Historic Gardens and Designed Landscape, Area of Great Landscape Value, Listed Buildings, etc.

It is recommended that CBCC should support the designation of Cammo Estate as a Local Nature Reserve and cooperate with the City Council and other members of the Cammo Estate Advisory Committee to ensure that a balanced approach is maintained between conserving and enhancing the natural heritage of the Estate and maintaining and enhancing opportunities for informal recreational appreciation and enjoyment of the Estate by visitors of all ages and abilities.

In the above context, Peter Scott has been working with Friends of Cammo to support their development of a Vision for the future of Cammo Estate. This Vision statement will be available for consultation with the community later in the summer and will be presented to the Community Council at its September meeting for members’ and attendees’ comments and potential support.

The airport in conjunction with the CAA is conducting a review of take-off and landing flight paths. This requires a very formal consultation process with local communities. The first stage runs to the end of August and involves the airport putting forward a number of possible paths for comment by you, the community. To put you in the picture a drop in exhibition is to be held in Cramond Kirk Hall from 3.00pm to 6.30pm on Thursday 7th July followed by a formal presentation by airport management in the KIRK at 7.30pm. Following this you will be able to make written submissions to allow the initial proposals to be refined. The final proposals will be issued for further consultation towards the end of the year.

We are advised by Walkerhealthcare that Marshall Construction will commence work on the development of the nursing home on the Cramond Place site before the end of this month. The Council’s West team are in touch with Walkerhealthcare about site access, parking and traffic management.

Since our last meeting the resurfacing of this section of road has been completed though the twilight hours thus minimising disruption to road users. The area around the mini-roundabout has not been done and we are advised that this is because the section was never adopted by the Council when the mini-roundabout was created by the developers. Neither the Council nor the developers emerge with any distinction on this matter. The Council had at least a year to agree a way forward with the developer or to tell them they would complete the work and bill them.

The appendix which follows comprises the end of session report for the Community Council. It is regrettable that we finish the session on such a negative note with the news of the prospect of permission being granted for the Nursing Home carrying the address of 18 Whitehouse Road. A few years ago this Community Council was one of relatively few in Edinburgh that signed off on the Planning Concordat with the Council. The City of Edinburgh Council is at this moment working on a revised version of the document. We have already offered some suggestions. There is no question that the new document – as with the old – is predicated on a presumption of supporting development. It is about trying to manage that in an inclusive and open way. The playing field is tilted in favour of the developer, never more so than it is now. The new document does however include the words (when describing the role of developers) “but development is not at any price…..” It remains to be seen whether this Community Council will still exist when the new document is circulated. I for one would not be recommending sign off of the new version unless some fundamental issues are addressed.