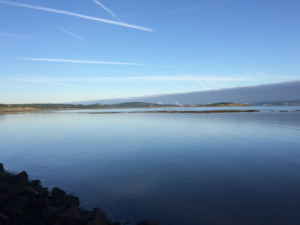 Following the withdrawal of the subsidy to the 64 Horsburgh bus service and the resultant loss of service the Community Council has written to the City of Edinburgh Council and Lothian Buses to ask that a review of bus services to the North West of Edinburgh – and especially those serving Cramond and Barnton – be carried out. There is a substantial inequity of service to the community and the regular and frequent road works, road traffic accidents, floods, fire, fallen trees and fallen rocks on the Queensferry Road all combine to make the service more and more unreliable. The City of Edinburgh Council has explained its, limited, responsibility for bus services following deregulation.

The Chair and I have met with officials from Lothian Buses and from Stagecoach. Various suggestions were made but there is a reluctance on the part of these operators to interfere with services which are currently commercially viable and which they claim, are, for the most part, providing a reliable and responsive service. Lothian Buses have agreed to give particular attention to North West Edinburgh when they conduct their next review of services – due to take place in the coming months. Extending the route of the number 42 to provide for some to start in Cramond and run directly to Davidson Mains and then on is the one where the greatest scope for some adjustment seems possible. It was also suggested that we might approach the Council to ask if they might review the route of the 13 bus – one of the few supported by Council subsidy – when they come to retender the service.

Stagecoach had routed one of the Fife buses up the Maybury Road and then into town for a period last year but it proved not to be a success and was withdrawn. They plan to review services again when traffic patterns have settled following the opening of the new Forth Crossing.

The Chair, Peter Scott, Gena Wylie and I met with Dave Sinclair of the Council’s West Team on Monday 7 November to discuss the local Action Plan. My September report advised that the West team at the Drum Brae hub was running with 5 vacancies (operating at 50%) on the local transport team and the message was until that was resolved then the team would be focussing on absolute priorities. Most of the vacancies across the transport (and the environment) teams have now been filled – but a tranche of support staff has been lost and there now seems to be very little capacity to pursue our priorities. Even where resources may have come from S75 development gain monies with specific proposals for spend then such schemes are unlikely to be progressed for a long time – and the monies languish in CEC coffers. We put it to Dave that what he was describing added more fuel to the fire regarding what was already a severely flawed planning system. Not only was the process totally skewed in favour of the developer insofar as the application was concerned we now had the situation where working to secure development gain seemed worthless for the Council were incapable of providing the resource to enable the commitment to be delivered.

Dave was clear in advising us that the level of service we could look forward to receiving would be less than that which we received before. For at least the short to medium term the team will be focussing on high priority, statutory essentials operating largely on a just in time basis. There are significant risks attaching to this as it would appear that what may be described as preventative measures will never get the priority they require; such minor problems are more likely to become major before they are addressed – and therefore may be more expensive. Schemes which are essentially about improvement stand little chance of receiving a hearing.

The CC may continue to maintain an action list. We can make the West Team aware of what we regard as real priorities but we are forewarned that they may not be the priorities of a locality which is now twice the size it was before. We shall do so in the most robust of terms.

It is difficult to know what to make of this latest interaction. On the one hand, there is clarity and honesty. Gone are the days when – despite the restructuring and churn – the message was that of “business as usual”. Now it is very much that of being advised to expect a poorer standard of service with the fewer officials that remain unable to focus on low-level issues that may be priorities at a CC level but which are unlikely to rise to become a priority for the new West Team. Alex Cole-Hamilton has agreed to come and speak to the CC at the January meeting about the Community Empowerment Bill. The principles and objectives of this legislation now seem a million miles away from the manner in which the Council is currently operating.

Linked to the above local action plan is the Local Improvement Plan and on Thursday 13 November Peter Strong – the new locality senior manager – led a meeting of representatives of community councils, resident’s associations, local organisations and service providers. The gathering provided an opportunity to discuss the needs and aspirations of the North-West Locality under the five themes of Place, Community Safety, Health and Wellbeing, Children and Young People, Employment. The group discussions which followed were noted and will feed into the continuing development of the local improvement plan. The North-West Locality now covers a significant swathe of the north of Edinburgh and with it a widely varying socio-economic mix including some of the most affluent areas of the City – but also some of the most deprived.

This exhibition was held at the Kirk Halls from 7 to 13 November. Representatives of the Community Council, Cramond Association and Friends of the River Almond Walkway were in attendance at the manned consultation day on Saturday 12 November, which was attended by over 65 people. There will be a presentation on the Visions project at the Community Council meeting on 17 November. Thereafter the Visions Group, comprising representatives of the partner organisations will assess feedback from the consultations and consider how preferred projects may best be progressed.

The quarterly meeting of this Group was held on 8 November. Following reports on what various local organisations were doing, the Sub-Group was given a guided tour of the Kirk Cramond Woodlands project. Member organisations were invited at short notice to submit proposals environmental and heritage improvements for possible inclusion in the Locality Improvement Plan to cover the next 5-year period. Other consultations are on-going with regard to Plan topics, such as transportation, safety and health.

In summary, ideas put forward on behalf of the Community Council included:

Community Council members and members of the community are invited to suggest other ways in which the Locality Improvement Plan may enhance the Community’s environment heritage and other services.

Despite the efforts and support of Lindsay Paterson concerns raised about an official paper put before the Transport and Environment Committee at the end of August did not prevent the Council from deciding that the SSI was a success. Notwithstanding the vehicular pressure that has been displaced onto Whitehouse Road the Council believe that overall the benefits of the SSI outweigh the risks. We are continuing to pursue this – both at the last meeting via Sergeant Holmwood and subsequently at the meeting on 7 November with Dave Sinclair.

To end on what I believe is a more positive note. The Council have recently advertised the TRO required to enable the application of yellow lines on key sections of Cramond Glebe Road – running north from Kirk Cramond towards the entrance to the public car park. The CC shall respond in largely supportive manner. There are some local differing views on the section at numbers 57 and 59 and also the section at the point of entry into the Village itself. We shall also ask that the line painting is done in a narrow-gauge manner in keeping with the heritage of the Village. And we shall ask that it is “policed” especially in the early months of operation.

A special thanks to local unsung heroes. Andrew Whitecross who lives in the Village has, once again, completed winter planting of several planters in the Village and on the prom. Adding colour to brighten the short, dark winter days. Also to George his not so lovely assistance.