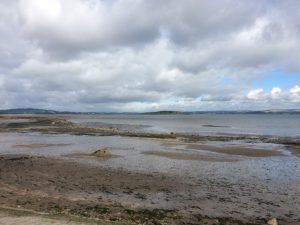 CBCC members and others will recall the discussion at the June meeting about the on-going saga, whereby the CC and local councillors have been encouraging Richard Neville Towle to repair the wall in his ownership, which has collapsed onto the Harbour-side land owned by the City Council adjacent to the Maltings frontage.

This collapsed wall has been a long-time eyesore and safety hazard and the adjacent wall is in danger of collapse.

The discussion in June informed the agreement of the following principles to which the CC would adhere in its engagement on this matter:

Support to the requirement for every effort to be made to fully explore the scope for including the strip of land in front of the Maltings within the terms of the lease agreement between the Heritage Trust and the CEC. Note that Cramond Heritage Trust and Cramond Association may be seeking community ownership/lease of the amenity land adjacent to the hole-in-the-wall should this be required. Their ability to pursue this possibility is helped by virtue of their charitable status.

Since June some further investigation has been carried out into the acquisition of the garden land by Mr Neville Towle. Examination of the deeds reveal some specific burdens attaching to his purchase of the land, including maintenance of the garden and maintenance and repair of the buttresses supporting the walls. However, within a few years of the purchase legislation enacting the repeal of old feudal burdens came into force and with this a presumption that feudal burdens were no longer enforceable.

The intent behind these changes was to do away with burdens which were in certain circumstances inhibiting much needed development. The Community Council has requested that the CEC should take legal advice on whether, given the specific nature of the burdens (including the requirement to repair the buttresses) and the proximity in time to the repeal legislation, the Council should seek enforcement of the burdens. We await s reply to this request.

On 24 August the Chair, Secretary and planning lead met with Gavin Pope of Cala Homes and Nick Wright of David Wilson Homes by way of an introductory meeting following their appointment as the lead partnership developers for the Cammo site.

The purpose of this Introductory meeting was to inform and discuss with CBCC the companies’ intentions for Cammo site. This was the first of several meetings with CBCC and other interested parties (including Cammo Residents Assoc.), prior to the Pre-Application Consultation stage and planning application.

Summary of Information and Discussion

The Secretary along with Rod Alexander (DMSA) and Lucja Leonard of the Village Hotel met with Alex Cole Hamilton on Friday 19 May to discuss the new A200 airlink service. Alex agreed to approach Richard Hall the Lothian Buses MD to set up a meeting to discuss the concerns about the route selected and other related service issues covering the area, including the curtailed 42 services. Those present will be invited along with a rep from the airport, the Leith MSP and depending on timing there may be someone from the Transport and Environment Committee. A meeting date is expected within the coming weeks.

The Committee structures within the Council including the NPs have been under review and that review continues. At a recent (August) meeting of the Almond NP held in South Queensferry there was widespread criticism of the new draft Locality Improvement Plans and their failure to drill down to cover issues that were of concern to Community Councils. Unless this is rectified officials were advised that the resultant document was not something which CCs could support. The Edinburgh Association of Community Councils has undertaken to canvass member CCs to determine the extent to which our sense of this document being notable for its omissions reflects the views of other Councils. The matter is to be discussed at the EACC meeting on 14 September. This issue is fundamental to how we engage with our local team going forward.

On an altogether brighter note I would report briefly on a meeting of the Civic Forum I attended on 5 September. Councillor Lewis Ritchie, the new Convenor of the Planning Committee is a breath of fresh air if he lives up to the commitments he made. He says he has a new energised cohort of Councillors on the Committee. From early meetings it is clear that they are all reading the papers that inform the meetings and the decisions they have to make. They have been meeting with the public and listening. They recognise they need to respond to the voices and views of communities and this includes the determination to have a right of appeal. The need for greater transparency is acknowledged and Councillor Ritchie said he tasked David Leslie who was there) to ensure that all future meetings of the Committee would record the voting decisions of each Councillor on the Committee.

As part of their induction they have been working with architects to better understand what is good design and to be better informed about the types of questions they should be raising with officials. The determination is to raise the bar in terms of quality of design. “Good enough” will no longer be good enough. As the Committee Leader he is committed to ensuring that the balance going forward has to be tipped more towards preservation of the heritage and away from a blind pursuit of development. All that said he recognised that the Council needed Edinburgh to continue to be seen to be opened for development but that it needed to use its position to drive up standards. He hoped that the unanimous vote of the Committee to reject the latest plans for the hotel development at the old Royal High School offered proof of intent.

This was a strident and assured presentation which was generally well received. The problem is delivery and enforcement and several examples were given of developers making changes to buildings especially within the old town which were entirely incompatible with the heritage of the locality. Shops fronts, railings were among the examples offered and non-compliance with conservation area guidelines were also mentioned. He was clear that guidelines are there for a purpose. But he was also somewhat downbeat about the capacity of the officials to enforce these expectations.

A brief presentation was made by Joe Taylor of the Cockburn Association about this year’s “Doors Open Day” and I took away some paper copies of the programme but copies can be viewed on the Associations website. The main events are on Saturday 23 and Sunday 24 September but check for there are other events on during the preceding week.

David White following his presentation to the CC in April has now approved the record of his talk and arrangements are being made for the minute to be uploaded on to the CC website. He has undertaken to pursue the matter of CC involvement in the new local quality groups being established with GP practices.